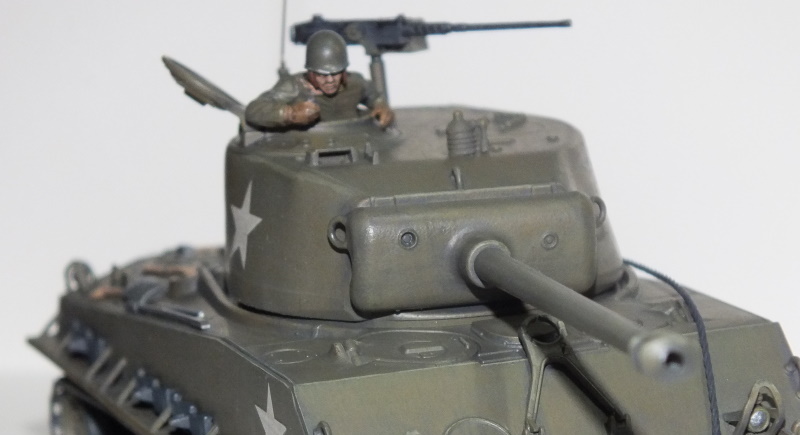 I’m generally following the instructions here, but I plan to assemble and paint the suspension, running gear and tracks before I continue with the rest of construction.

I begin with lower hull assembly. Fit is great and I included the weights provided, though I still don’t really understand why they’re there…

There is nice detail on the rear hull: the exhausts are particularly well done, though I don’t think they will be visible on the finished model.

Then it’s on to assembling the suspension bogies and sanding moulding seams off the roadwheels. No problems here and fit is great but location is also particularly good. When adding the circular parts on the front and rear of the main bogie frame, I failed to notice that these face in opposite directions. That became obvious as soon as I tried to fit one the wrong way round: it wouldn’t fit. Regular readers will know that I have been known to fit parts upside down, back to front or occasionally, both. Good location helps to avoid this.

Although I will be adding the tracks later, I do want to assemble the top run and the curved sections that go round the sprocket and idler now, before I paint anything. There are five separate links at front and rear, and two more single links used to connect the elements of the bottom run. There are no spares, so do be careful! I suppose you could modify some of the spare track links that are intended to be stowed on the fenders if you do lose one of the links, but it’s better not to if you can avoid it.

I followed the advice in the instructions by gluing the five separate links together flat. Then I dry-fitted the sprocket and idler and glued the inner wheels of the large return rollers in place. Then, I placed the top run in position and, before the glue was completely set, curved the five links at either end to the right profile and attached them to the top run. When it’s dry, the whole assembly of top run with front and rear curves attached can be removed for painting separately. Obviously, I won’t be able to construct the bottom run until the suspension bogies and road wheels are assembled and in place, but that should be much simpler because there are fewer single links to deal with.

I do want to mention location again here: there is a vertical peg on the inside wheel of the rear return roller. This engages with a hole in the top track run (which will be hidden by the fender on the completed model). Using this peg to locate the top track run means that you are assured it’s the right way round. That’s great, because it means you can’t inadvertently fit the tracks upside down. It feels like whoever designed this kit was actually thinking about assembly. Top marks Tamiya!

Then I paint and assemble the suspension parts. Assembly is straightforward and simple, For painting I used a base of Vallejo Russian Uniform, highlights in a lightened version of the same colour and a dark grey oil wash to bring out the shadows. All tyres are painted in Vallejo Dark Grey.

With the suspension in place, I can assemble the bottom track runs in the same way as I did for the top.

Then these are painted in a base of Vallejo Dark Grey, drybrushed gunmetal highlights and a brown wash. Then I fit the tracks, and it’s a bit of a stretch – perhaps one additional track link might have been useful?  That said, once in place, these do look like steel tank tracks, not rubber bands.

With the lower hull complete, it’s time to take a look at the upper hull. The seven parts that comprise the main construction, you guessed it, fit perfectly – no filler needed here at all.

I add all the remaining bits and pieces to the upper hull, other than the tow cable, tools and spare track links which I’ll add later. I guess you could argue that the front and rear light-guards are a little thick, but personally, I’d rather accept that than faff about with tiny PE parts.

Next, the turret, and there are no problems with basic construction.

The completed turret, minus the machine gun.

You can see on this photo of a surviving M4A3E8 that there shouldn’t be any visible seams on the upper rear part of the turret, though the lower seam looks OK. There doesn’t seem to be any option but to get busy with some filler and fine sandpaper, which is a pity, because the casting texture is well done and sanding will flatten this. I sand everything down and then try to recreate the texture with plastic cement.

I won’t really know if this has been successful until I get some paint on it, and that’s what I do next.

I start with several thinned base coats of Vallejo Russian Uniform – yes, I know, it’s a little light for Olive Drab at this tage, but once it’s finished with a wash of dark grey oil, that should bring it closer to the right colour. And the upper seam on the rear of the turret is no longer visible – hurrah!

Then both hull and turret get some dry-brushed highlights in a lightened version of the base colour.

Then I add the decals – I’m going for the version with the five white stars. The decals are dense, but thin – I use Vallejo Decal Fix and Decal Softener. It isn’t obvious in this image, but the decals do conform to the cast texture beneath.

Then, it gets a coat of clear varnish followed by a wash of Abteilung Oils Dark Mud, a dark grey. I let this dry and then carefully remove most of the wash with thinner – this darkens the base colour to something much closer to Olive Drab and leaves deeper shadow in the engraved surface detail as well as providing some colour variation and streaks on the hull and turret.

With that done, it’s time to add the last few bits and pieces – the tow cable, tools, spare track links and commander figure and a stretched sprue radio antenna. With those added, it’s done!

This really is a cracking kit. Fit and location of all parts is as good as you could hope for, detail is good and this builds into a pretty fair representation of a late model M4. Is it perfect? Of course not: things like the headlight guards are a little oversize, it lacks some of the fine detail of its 1/35 counterpart and it would have been nice to see some stowage items.

The link and length tracks are also a little fiddly to build if you want them to look good, though they’re easier than those found on smaller scale kits. Overall though, there isn’t much to dislike here. And the finished tracks actually look like tank tracks. If you have read other review here on MKW, you’ll know just how rare that is. This is a straightforward build that produces a pleasing finished model. What more can you ask from a plastic kit?

And what about 1/48 scale? Well, the finished kit is bigger than a 1/72 kit and, er, not as big as a 1/35 kit (you don’t get that sort of incisive analysis on other kit review sites, you know!). I mean, it’s fine. I don’t feel an overwhelming urge to build more 1/48 kits, but I wouldn’t rule it out either. If I’m honest, I do probably prefer the challenge of smaller scales, but I can’t think of any reason you’d be unhappy or disappointed if you chose this as an introduction to 1/48 scale.

Recent Posts from another blog by the author of MKW: Civil War Sites of Andalusia