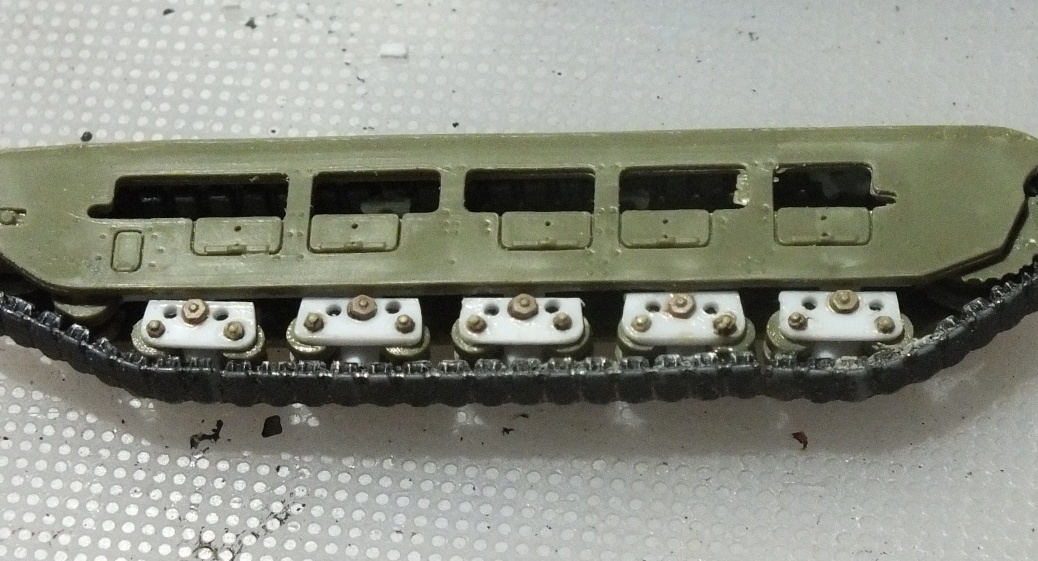 Time for something new here on Model Kit World. This is the first of an occasional series of conversion build reviews where I attempt to convert a kit into something a little different. These will be more detailed than my usual build reviews, showing a step-by-step guide to what I have done in case anyone else fancies doing the same.

In this conversion, I want to try to change an Airfix 1/76 Matilda Hedgehog into a Matilda II Mk I as used by 7th Royal Tank Regiment (RTR) in France in 1939/40. I would rather have purchased a base Airfix Matilda II, but it seems that kit is now discontinued. It seems that the only currently available kit featuring the Airfix Matilda is the Hedgehog variant, a version with a rocket launcher on the rear hull. Happily, this kit contains the complete original kit with an extra sprue for the Hedgehog launcher. The launcher simply fits over the rear hull and there are no new mounting holes or anything else. So, if you want to build a basic Matilda II from the Hedgehog kit, all you have to do is ignore the parts for the launcher (and find some new decals). Even the long-range rear fuel tank and mountings, which you can’t use if you fit the Hedgehog launcher, are still provided.

I want to convert this:

Although it isn’t explicitly stated, the Airfix kit probably represents an A12 Matilda II Mk. II or later. The most obvious visual change from the original version was replacing the co-axial Vickers water-cooled machine gun with an air-cooled BESA machine gun. Initially I thought that all that would be required was to create a co-axial Vickers machine gun and a new paint scheme. However a bit of research (and you do need to do a fair amount of research for any conversion) suggests that there are actually several changes needed.

Obviously, the co-axial machine gun mount will have to be changed to the Vickers style, which had its own external mantlet, as shown above.

All the Matilda IIs of 7th RTR in France had their suspension jacked up to increase ground clearance. This pushed the suspension bogies down so that the top of the bogies projected just below the bottom of the side hull plates. This is actually quite a striking change to the way that these Matildas looked and it’s something I will have to address. You can see what I mean on the photo above of a knocked-out BEF Matilda in France.

All 7th RTR Matildas also had a large tail skid added to the rear of the hull. This was fabricated in the field to improve trench-crossing ability and was made from welded plates of steel. The exhaust silencer was moved inside this skid and the left hand exhaust pipe was re-routed to pass into the left side of this skid while the right hand exhaust was moved to the underside of the hull where it was routed into the right side of the skid. You can see the tail skid and the new exhaust arrangement in the image above of another knocked-out BEF Matilda in France.

The tracks provided with the Airfix Matilda are supposed to be the later tracks fitted to the Mk. II onwards. They aren’t very accurate, but the first models of Matilda II were fitted with a completely different style of track, which you can also see above. The Airfix tracks don’t look anything like those. Finally, all the first batch of Matildas had only a single headlight, mounted on the left side of the front hull. There are other detail differences, but at this scale, these are the only five visual changes that I’ll be trying to make to the Airfix kit.

I’ll be scratch-building most of the new bits, with a couple of exceptions where I’ll be using the Vickers machine gun mantlet and tracks from a previously completed RPM Cruiser Mark I. That’s in 1/72 scale rather than 1/76, but the difference is so small that I don’t think it will be noticeable.

The first step is building new suspension bogies which can be placed lower than those on the kit. Here’s the starting point.

As you can see, the bogies are moulded-in parts of the hull sides. They’re also the wrong shape. This detail from a drawing of a BEF Matilda II Mk. I shows what I’m aiming for.

The first step is to remove the existing bogies and sand the inner hull side smooth.

Then, I make twenty bogie plates from thin plastic card. The ten that will go on the outside get bolts (carefully cut off a 1/35 kit) and lightening holes. Some of which are almost in the right place… The inner plates won’t really be visible on the finished model, so I leave them plain.

Then, I attach the rollers from the kit (minus the mounting spindles) on to the bogie plates and add a small mounting strip of plastic card.

Then, these are fixed to the outer hull plate, to which a thin strip of plastic card has already been added. You do have to be careful to replicate the location and spacing of the original bogies. It all looks a bit messy from the inside, but this won’t be seen when it’s complete.

From the outside it looks all right. Here’s one modified and one original outer hull plate.

Then, the sprocket, idler, jockey wheel and internal bogie plates are added and the inner and outer hull side halves are joined.

And this is where I end up – with two completed hull side assemblies with modified suspension bogies.

I’ll be using the tracks from the 1/72 RPM Cruiser Tank Mk. I. These are visually much closer to the tracks fitted to the first Matilda IIs, and I think that perhaps they can be enhanced even more at the painting stage. The only problem is, these are hard plastic tracks that are moulded with the sprocket, idler, roadwheels and return rollers modelled integrally. Time to get the files out… Here’s the starting point.

First, I cut off the roadwheels, sprocket, etc.

Then, I cut sections off the track and bend and file until they fit the Matilda running gear.

Then, I join and blend the sections and this is what I end up with. Certainly not perfect, but I think it’s better than using the inaccurate Airfix tracks.

Of course, this approach means that I’ll have to paint the tracks, rollers, etc. in-situ, but I can live with that if the result is better-looking and more accurate tracks.

And in the next thrilling episode, I’ll be tackling the hull and turret. See you then!