It’s time to start the build of the Trumpeter KV-1 and normally at this stage of a 1/72 kit, I’d be thinking about drilling out the main gun. Happily, slide moulding means that isn’t necessary here. Hurrah! Unfortunately, instead I have to consider what to do with the nasty, too-tight vinyl tracks.

If you have read my in-box review of this kit, you’ll know that I was unimpressed by the vinyl tracks provided with this kit. They are not only impervious to glue, they’re rather short. I joined both using a needle and thread but, when I tried a dry-fit, one was so tight that it snapped off the idler. So, before I even begin assembly, I have to think about how to stretch the tracks. In the end, I keep it simple – I place two screws in a block of wood with the tracks stretched between. I’ll leave them in place for several days in a warm room in the hope that this will stretch them a little.

Then, it’s time to start assembly. I begin with the turret, and everything fits nicely with no filler required and only a little light sanding needed where the turret halves join. The gun mount and mantlet are fixed in position and can’t be raised or lowered. That means that you have a main gun that is elevated rather high, but I can live with that.

There are no problems adding the various bits and pieces to the upper hull. I’ll be leaving the upper and lower hull parts separate until later, when I have fitted the tracks, but a dry assembly shows a good, positive fit with no notable gaps.

Then I add the running gear to the lower hull. Again, everything fits nicely with no major drama. One minor issue is that the attachment points of parts to the sprues are rather thick. This, combined with the fact that the plastic of which they are made seems rather brittle, led to my snapping some small parts when cutting them from the sprue. This isn’t a major problem, but some care is required.

Then, it’s time to begin painting. I’ll be following a different approach for the upper hull and turret and the lower hull. For the lower hull, I begin by giving everything a coat of Tamiya TS-28 Olive Drab 2 from a spray can. This seems a good match for Russian green.

Then, I paint the upper part of the hull and the sprocket with Vallejo matt white, also from a spray can.

Once that’s done, I paint the roadwheel and return roller tyres with dark grey.

For the hull and turret, I paint in a different order. First, everything gets an overall spray coat of Vallejo white.

Then, I mask and add the small areas of Tamiya TS-28 and add the turret decals and paint the machine guns and exhausts before giving it all a coat of clear varnish

Then, it all gets a pin wash of dark grey oil paint to pick out shadows, highlight the intake mesh screens and to give everything a grubby, well-used look.

I do the same thing to the turret, lower hull and the running gear and then, it’s time for the tracks.

Fitting the tracks isn’t as difficult as I had feared. Their time on my home-made stretching rack has made both significantly longer and I am able to fit them without risking snapping off the sprockets or idlers. For some reason, this photo makes the tracks look unpainted, but they aren’t – I used my usual scheme of a dark gunmetal base followed by lighter gunmetal for highlights and an overall brown wash, all applied before fitting. As you can also see, the track on the far side is now quite loose, but that’s OK because I still have plans for the tracks.

With these safely fitted, I join the upper and lower hulls and the turret. I also add spare track links and the tow cables and it’s immediately obvious that these cables are a little long and, because they are made of the same glue-resistant vinyl as the tracks, I can’t simply cut out a small section and reglue. They don’t look terrible, just a little odd.

The heavy KV-1 tracks have characteristic sag, and the last job on this kit is to try to model this on my newly stretched tracks. I use a few small curved sections cut from a transparent plastic bottle and insert these between the tracks and the track guards.

This approach only works where you have broad track guards close to the tracks, but these small pieces of plastic are essentially invisible from most angles once they’re in place on this kit. With that job done, the Trumpeter KV-1 is finished.

Ninety percent of this kit is great. All the plastic parts fit well, are cleanly and sharply modelled and seem to be accurate to the original subject. Parts like the mesh intake screens perhaps could have been better executed, but overall the main construction is very good indeed.

Then there are the tracks. Now, I have several other reviews where the tracks on Trumpeter KV-1 kits in 1/72 are either not mentioned in terms of length or where it is noted that they are rather long and a little loose. That certainly wasn’t the case on this kit, but perhaps I was just unlucky? If this came with length and link tracks, or flexible tracks that could be glued or even vinyl tracks that were long enough, it would be absolutely superb.

But it doesn’t. And because of that, this is a little hard to recommend. If you’re confident about your needle and thread skills and willing to stretch the tracks before putting them in place, you can end up with a very reasonable result. Otherwise, you may want to look elsewhere. However, having spent so much time moaning about the tracks, I’m not too unhappy with how they turned out here. The join is still fairly obvious but at least they do have some sag so perhaps this isn’t such a major issue after all?

I guess it all depends what you want and how much time you’re willing to put in. I think there is the basis of a really cracking kit here, but it may take a little work to realise that potential, especially in regard of the tracks.

The Mindful Shooter: Zen and the Art of Replica Pistols 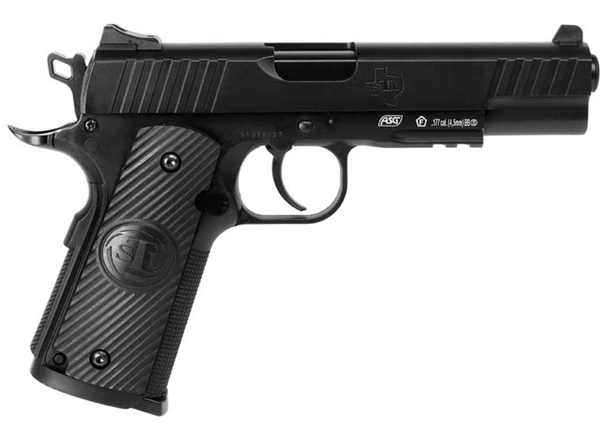